Many ask us how to best build for calves. Many feel that there is too little information in the area, and that the options are limited.

If you do not want a labor-intensive calf care, what do you do then? If you want healthy calves, what should you think about? How important is ventilation? Should you keep a calf hot or cold, outside or inside?

Here we try to gather as much information as we can. It is an ongoing work. We do not hide behind a chair that we ourselves believe in automatic cleaning, and there are several religions in calf care.

Feel free to contact us if you have questions or something you want to point out. 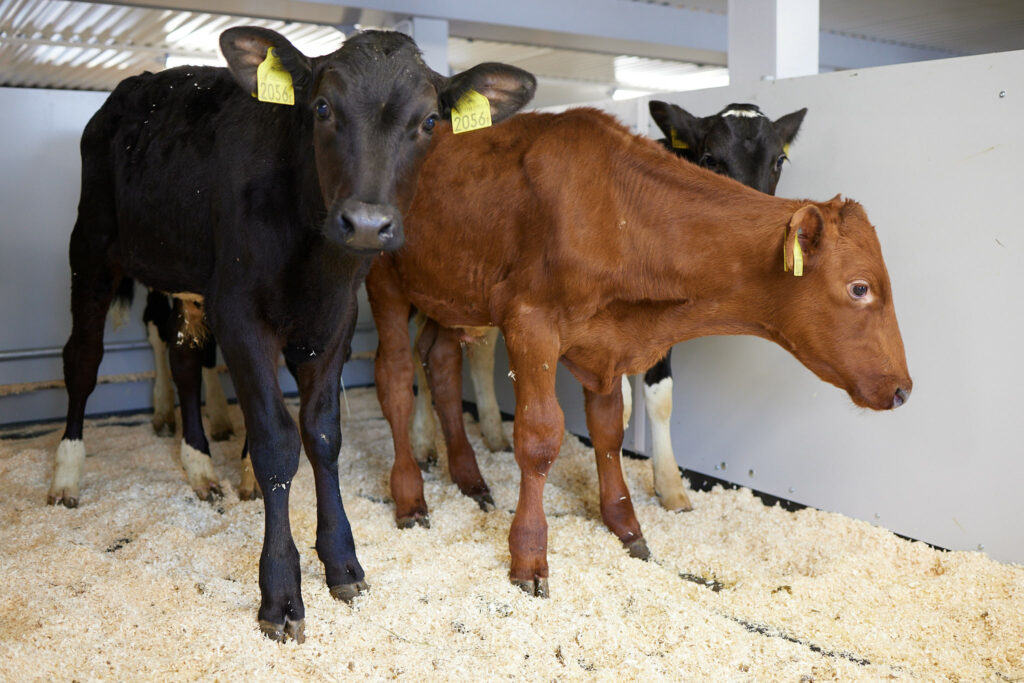 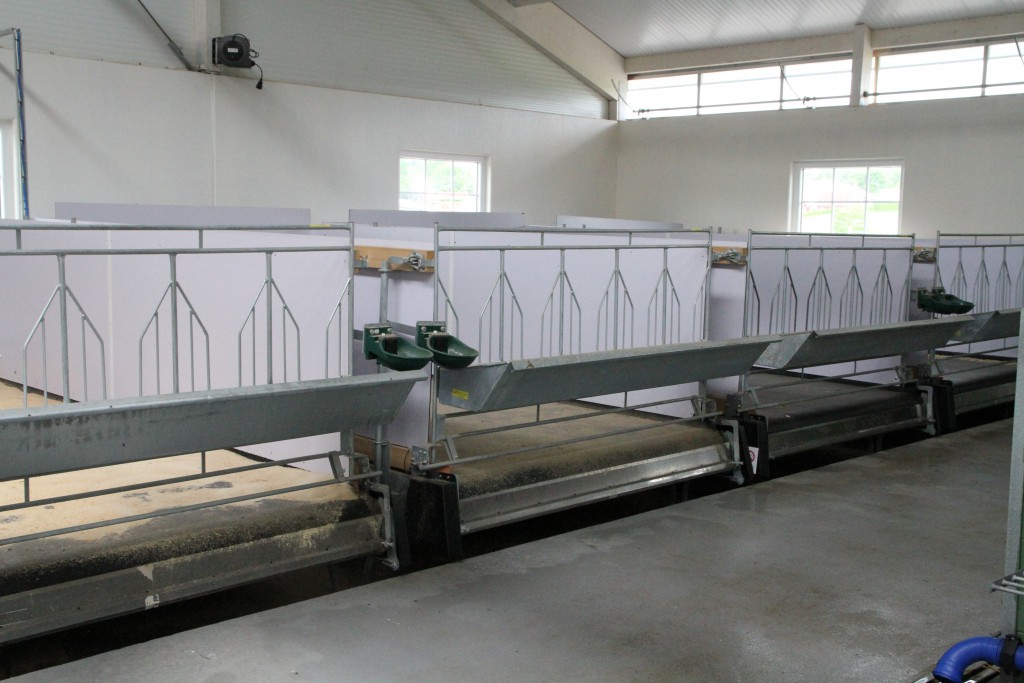 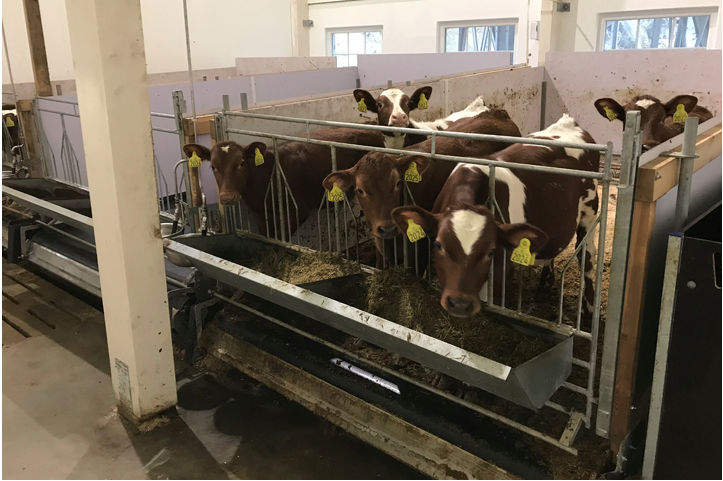 Here you will find information that we believe may be relevant to you who are planning a change in your calf care.

Here you can read about how we think automatic cleaning can contribute to many of the calf's basic needs.
Read our PDF-guide

We see that automatic cleaning offers many benefits, especially if the manure is removed from the stable within two hours of leaving the animal. 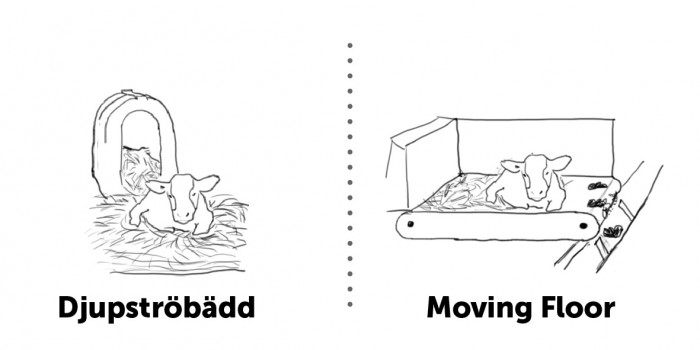 - Continuous cleaning ensures that the calf is always clean and dry.
- Disrupts bacterial growth, which reduces infection pressure.
- The ammonia levels in the stable air can be reduced by up to 95%.
- When large amounts of ammonia do not need to be vented, it is easier to keep the calf draft-free.
- The cleaning removes moisture, which is positive for the calf.

To build with automatic cleaning

If you are interested in knowing more about automatic cleaning, you are welcome to contact us. You can also read more about each product via these links;
Single BoxGroup Box

During the calf's first month of life, it has a thermoneutral zone of 10-26 degrees. After one month, this changes to 0-23 degrees.

If the calf is outside its thermoneutral zone, it needs more food. At minus degrees, you can count on up to 40% increased energy needs.

The most suitable relative humidity for calves is around 50-60%.

It is important that the calf is not standing in draft. The definition of draft is 0.3 m/s, which is hardly noticeable to our senses. Smoke rises straight up at 0-0.2 m/s and is a good way to check air movements.

A strewn surface or a deep litter bed accumulates urine and manure and when the calf is protected from drafts, for example through a hut, a microclimate arises in the calf with a considerable ammonia emission that can potentially affect the calf's airways.

The ammonia content in the stable must be below 10 ppm according to the Swedish Board of Agriculture.

At birth, the calf is a monogastric animal where the running stomach acts as a stomach, and the main breakdown and absorption of food takes place in the small intestine. Abdominal sputum adds enzyme and bile that breaks down protein, fat and carbohydrates. The womb is completely sterile at birth. The microflora that establishes itself there is affected by hygiene and the local environment and contact with older animals and feed materials.

The newborn calf performs a series of instinctive behaviors, ie innate behavioral programs to get started suckling. The calf responds to key stimuli such as the angle between the leg and the body where it tries to suckle. Breastfeeding and sucking gradually develop very strongly into something that needs to be done to a certain extent, largely regardless of how much food the calf has ingested. When the calf lacks a teat to suck on, the calf tries to suck on other objects or individuals. From the age of seven days, the calf begins to socialize with other calves. Healthy calves also start spawning early in life. The first spawning takes place with the mother and later with other calves.

Separating the newborn calf from the cow and placing the calf in a solitary box during the milking period limits the opportunities for the calves to perform natural behaviors and there are studies that show that calves that grow up find it more difficult to interact in groups as adults. New Canadian studies show the importance of seeing calves as social animals that should grow up in small groups. Younger calves can learn from older calves, which, for example, can stimulate feed intake.

The calf's most important growth phase is 0-3 months, after 3 months of age puberty occurs and the calf must then grow at a slower pace for the udder to develop well. Since weight and hole largely determine sexual maturity, it is the calf's growth in the first three months of life that largely affects the age of insemination.

Calves are generally said to need to grow 700-800 grams per day to be fit and healthy.

It is important that the calf is in good nutrition so as not to get sick.

The fact that the calves grow well during the first months of life is crucial because a high growth rate can later disrupt the development of the udder tissue and lead to a lower ability to produce milk in early lactation.

Because calves are born without any antibodies in the blood, they lack resistance to infections and they are therefore dependent on getting colostrum from the cow. Colostrum is rich in immunoglobulins and they are absorbed by the calf and the antibodies circulate in the blood that protect against infections, so-called passive immunization. Immunoglobulins also provide local protection in the gastrointestinal tract.

The calf's ability to transfer immunoglobulins from the intestine to the blood is greatest at birth. This ability gradually decreases to cease after 1-2 days. Therefore, it is important to get colostrum in the calf as soon as possible after birth. The calf should receive 2 to 3 meals of colostrum during the first day. Each meal should be at least 5% of the calf's live weight. To maximize the calf's uptake of antibodies, at least the first two targets of milk should come from the first primer, as this milk has a much higher concentration of immunoglobulins than the milk from later primers.

An interesting question is whether the calves grow best in a warm or cold environment. In an experiment where calves were housed in solitary boxes outside or inside, it was seen that the calves that went outdoors in calf huts grew better in the first month. This may be due to the poorer air quality prevailing indoors. But seen over the entire period day 1-52, there was no difference in growth. A study from Norway showed that calves that had been housed in a cold room grew worse in the first 4 weeks, if they did not get more milk to drink. But even in the second month, these calves (which grew worse in cold space) grew worse than the others despite having more to eat.

It is difficult to determine via these surveys what gives the best growth, but group boxing tends to be a little better from a growth point of view. Warm or cold housing is more uncertain about what is best, you have to look at the conditions you have on your own farm.

During the first month of life, the calf has a need of at least 10 MJ / day, which corresponds to about 5 liters of whole milk. Studies have shown that calves drink significantly more than that. A Danish study showed that calves fed after drinking for 6 weeks on average drank 8.5 kilos / day. When calves go to suckler cows, it is difficult to know how much the calf ingests, but it is estimated that it is about 8.5-11.5 liters / day.

The most common cause of calf mortality was shown in a sub-study in the so-called heifer project to be pneumonia and the mortality was highest during the first week of life. In the youngest calves, diarrhea was also one of the more common causes of death. There was an indication that the mortality of young calves was lower in herds that had their calves in smaller group boxes and feeding with a bucket compared to herds that had large boxes and automatic feeding or solitary boxes. The project also saw that larger crews had higher mortality.

Young calves should have access to water as early as possible. A calf that weighs about 50 kilos has a water requirement of about 5-6 liters per day. The amount of fluid they ingest through the milk soon becomes insufficient. Calves that have access to water start eating roughage and concentrates earlier. Do not give water by diluting the milk, as this impedes the ability to coagulate the milk in the rumen.

Keep up to date

You can always read the latest news about Moving Floor on our news page where we collect external articles and our own blog posts. Do not forget to follow us on Social Media!

We use cookies on our website to give you the most relevant experience by remembering your preferences and repeat visits. By clicking “Accept”, you consent to the use of ALL the cookies.
CCPA.
Cookie QuickinfoAccept
Manage consent

This website uses cookies to improve your experience while you navigate through the website. Out of these, the cookies that are categorized as necessary are stored on your browser as they are essential for the working of basic functionalities of the website. We also use third-party cookies that help us analyze and understand how you use this website. These cookies will be stored in your browser only with your consent. You also have the option to opt-out of these cookies. But opting out of some of these cookies may affect your browsing experience.
SAVE & ACCEPT